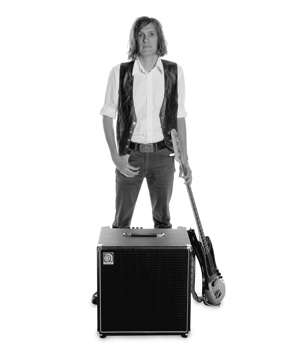 Heralded as the leaders in the garage rock revival of the early 2000s, The Strokes and their retro lo-fi guitars-bass-drums were hyped as the saviors of rock. Their 2001 EP The Modern Age was ground zero for a record label feeding frenzy that became one of the largest bidding wars ever for a rock band. The Strokes' major label debut, This Is It not only lived up to the hype, but crashed right through it with a refreshing blast of enjoyably scruffy guitars and street-edged attitude. The result was critical recognition in 2002 by ASCAP's Pop Awards, the UK's Brit Awards (Best International Band) and the pivotal NMEs, where they won for Best Album, Band of the Year, and Best New Act. In keeping with back-to-basics, Nikolai Fraiture uses the un-crowded room for one-two punch bass runs that are as recognizable as the band's riffs.