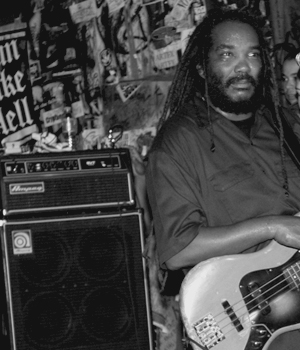 Washington D.C.'s all African-American group Bad Brains are not only cited as pioneers of hardcore punk, they're regarded by their fans as the first hardcore band period, pushing the extremes of punk with intense speed and remarkable musicianship. With a music background of jazz-fusion and reggae and super-sized by funk and metal, Bad Brains, who took shape in 1979, went on to become one of the most influential punk bands of all time. Critics call Darryl Jenifer — bassist throughout the band's classic line-up (guitarist Dr. Know, vocalist H.R and drummer Earl Hudson) and numerous line-ups, break-ups and reformations — a bassist of uncanny virtuosity. His precision, speed and interplay between drums and guitar are a fundamental BB attribute. The band's punk masterwork, I Against I (released in 1986), showcases Jenifer's stunning, synchronous bass work and its role in Bad Brains' highly energetic and elaborate arrangements.