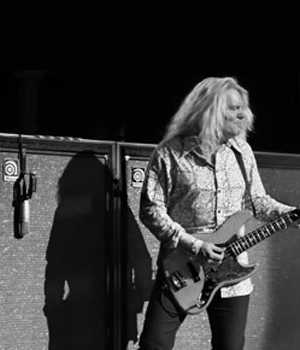 Bruce Hall joined REO Speedwagon in 1978, just as the band was striking platinum with affable hard rock songs like "Roll With The Changes" and "Time For Me To Fly." This set the stage for REO's shift from harder rock to a more pop sound, giving Hi Infidelity four Top 20 hit singles ("Keep On Loving You," "Take It On the Run," "Don't Let Him Go," "In Your Letter") and going on to become the biggest-selling rock album of 1981. REO's 1985 #1 power ballad, "I Can't Fight This Feeling" has never fallen off AOR and classic rock radio play lists in over 20 years. Replacing bassist Gregg Philbin, Hall not only brought his broad tone to the table, but his voice as well, handling lead vocals on Nine Lives' "Back On The Road Again," which has become one of REO's more popular concert staples.