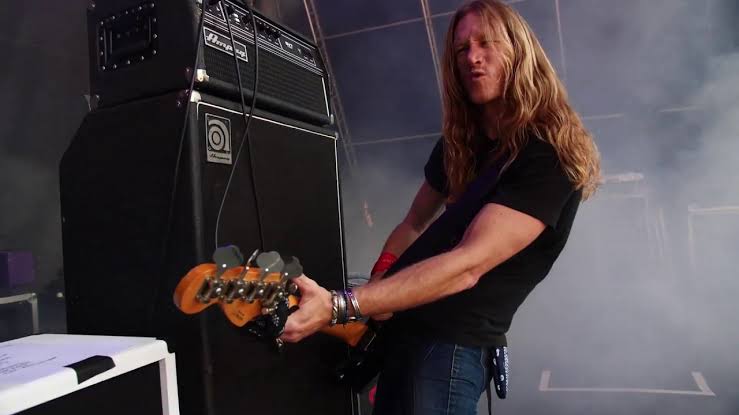 As bass player for Death Angel (Nuclear Blast), Damien’s beginnings would find him an unconventional fit for Bay-Area metal legends.

Raised in rural Santa Rosa just north of San Francisco, one would have been more likely to catch Damien performing a corporate gig or in a Duran Duran tribute than banging his head at a Slayer concert.

Through the exposure of the underground SF heavy metal culture, Exhumed frontman and songwriter Matt Harvey sought Damien’s playing to complete his newly-formed thrash-metal project, Scarecrow (Level-Plane Records). A split EP and North American tour in his rear-view, it was soon announced that Death Angel’s original bass player would step down, with the bass duties being fulfilled by Damien.

Since 2010 with Damien in the fold, Death Angel has had their most consistent and prolific lineup since formation, releasing 4 studio albums, an official live album, a feature-length documentary, touring along side Slayer, Anthrax, Testament, Exodus, opening for Metallica’s 30-year Anniversary shows, and sharing stages with several many legendary bands, Death Angel is now stronger than ever.  Now in 2020, Death Angel celebrate a first-time Grammy Nomination selection in the Best Metal Performance for their latest album “Humanicide”.

As a seasoned touring machine, one may witness Damien’s subtle and melodic style of bass playing while he continues to perform world-wide. Whether on stage, in the studio, or in the rehearsal space, his playing serves to provide a sensible and smooth low-end that distinctively supports the percussive and rhythmic foundation while accentuating soul-felt, emotionally-drenched melody. Damien is known as the heavy mellow performer of bass