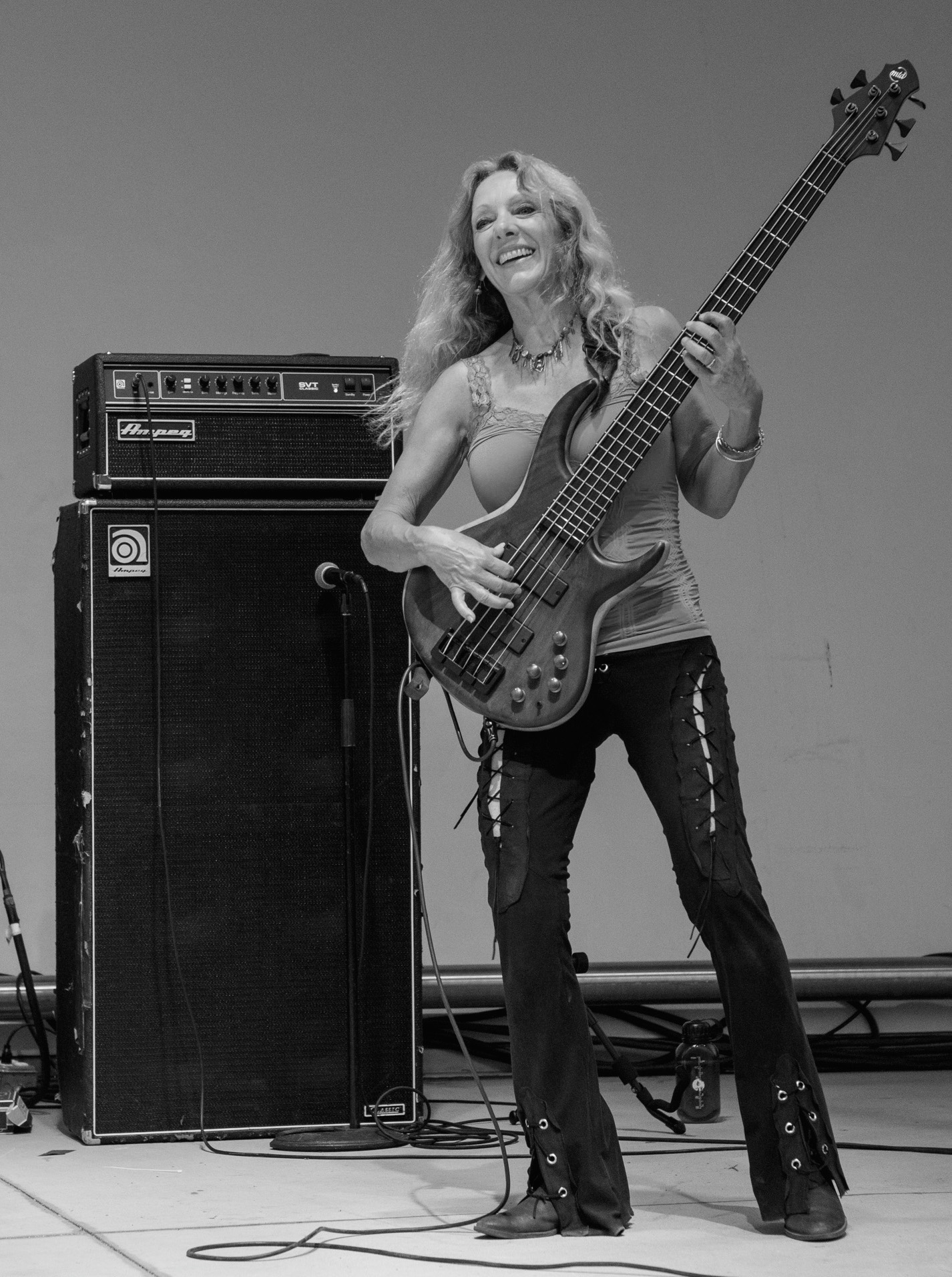 Liza Carbé is a professional bassist/guitarist/vocalist, and is a co-founder of Incendio.

Liza sang in her first musical at the age of five. After moving to California from Connecticut (so that her Sicilian-born father, Nino Carbe, could return to resume work at Disney studios), she started studying guitar at the age of 9. During her first year of college, she was fortunate to have a professor who studied with cutting-edge composer and instrument creator Harry Partch. One of her first assignments was to combine her welding skills with her musical knowledge and invent an instrument. Thus the Zil was born – a three-foot metal cone with 32 piano strings. Shortly thereafter she was asked to play her new Zil on the critically acclaimed new music CD “The Pillory” and later again on the “The Pillory/The Battle” written by Jasun Martz. She also performed in local clubs singing and playing guitar and working in churches as a soloist and section leader.

After graduating from Cal State Northridge with her degree in classical guitar and voice, she took off across the country, playing bass and singing with the 80’s metal group Vixen. One year later, she took another musical left turn, touring and recording with the R&B Christian artist and one-time lead singer of Santana, Leon Patillo. As she was always writing and recording with other composers and producers, she started applying her writing talents to her band Red Van Go, wherein she joined forces with longtime friends Larry Weber on guitar and Nicole Falzone on drums and vocals. The group was an eclectic rock/jazz combo that put out an independent CD and did two tours of Japan, during which they filmed a concert on the popular Tokyo Freak television show. Through 1992-1993, she was honored to be selected to play with Lindsey Buckingham of Fleetwood Mac – she was asked to play guitar and sing on his solo tour across the United States and Canada. Amongst the highlights of this tour were getting to play “Go Your Own Way” with Lindsey every night, playing Radio City Music Hall, and opening many dates for Tina Turner as part of her “farewell” stadium tour.

For the last fifteen years, she has focused on working with her husband and partner, JP Durand. In 1997, they were hired by Paramount Music to compose cues for Entertainment Tonight, which were then used extensively on many other Paramount shows. Since then, they have written many different library CD’s for Sonoton, Megatrax, Five Alarm Music and Frameworx. They have also written, produced, and performed on music for “Extreme Makeover”, “American Idol”, “Who Wants To Be A Millionaire”, “Ellen”, the Flameworthy Country Music Awards, several independent films, and a host of other network shows as well as A&E (“History of Mexico” miniseries) and Animal Planet (“Who Gets the Dog” and “Ultimate Zoo”, amongst others). Liza has also worked with the Los Angeles based-organization “City Hearts” which brings music, dance and art to the inner city and high risk youth.

Liza has co-produced and co-composed the nine Incendio international CD releases as well as two live DVDs. She and JP just released their first duo CD “A Bridge Between” which has been getting excellent reviews.  In addition, she has produced, co-produced, and/or engineered over 30 CD’s by other artists including acclaimed international jazz vocalist Carmen Lundy, saxophonist Steve Marsh (from Lyle Lovett’s Large Band), her blues project, the Red Mystics, and her pop group, Book of Storms. She has official endorsements with AMPEG Bass Amps, MTD Basses, Alvarez-Yairi Guitars, Audio-Technica Microphones, Mackie Designs, EAW speakers, Savarez strings and Rotosound strings.