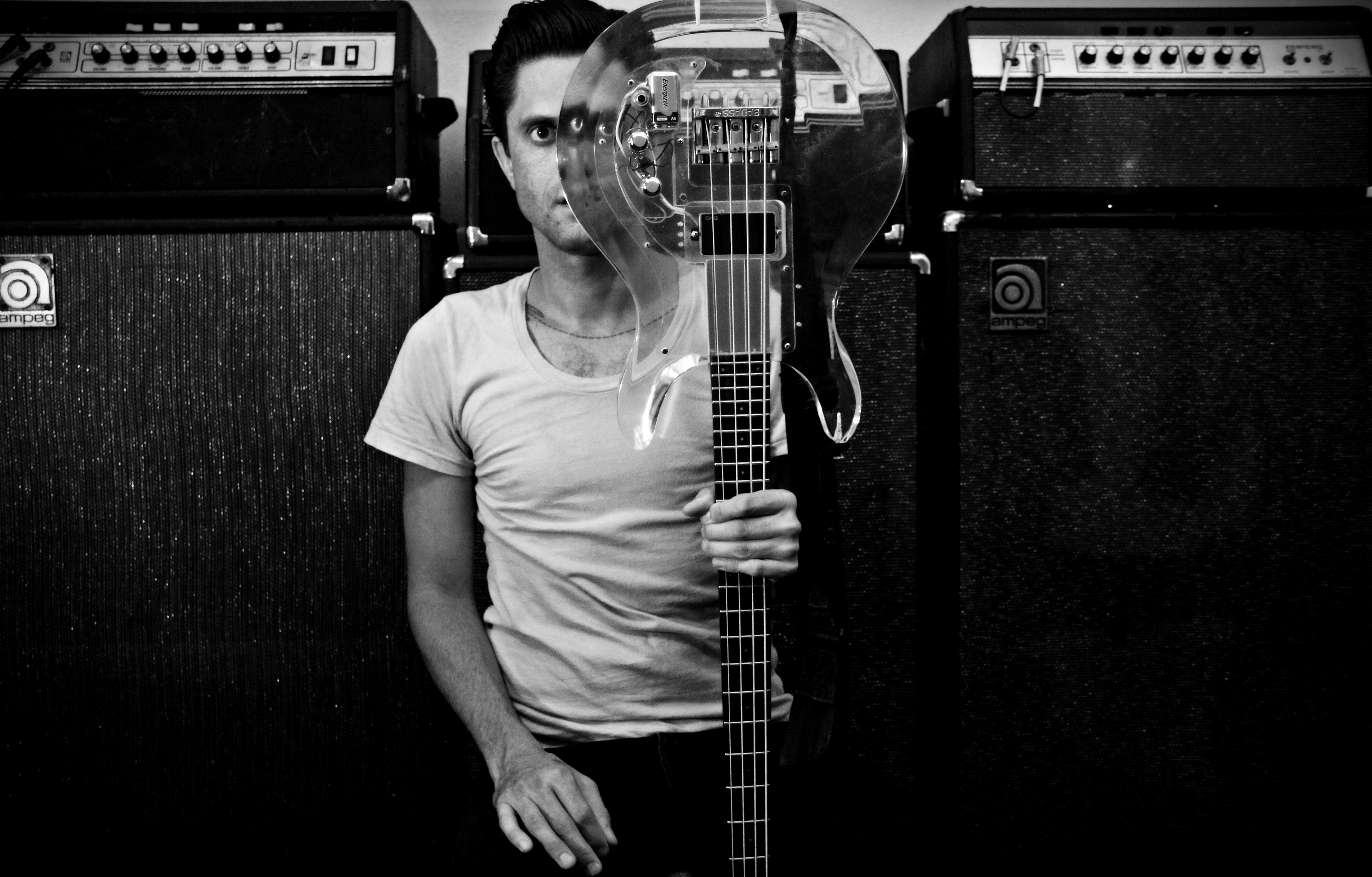 You’ve perhaps seen Justin Pearson right before or after a set at one of his shows: calmly arranging equipment, setting up for the gig with the other band members, polite and friendly, but not particularly outspoken. Then you see him perform, and all of a sudden there is a man possessed in front of you—full of seemingly impossible contortions, a frantic playing pace, and vocals spit so aggressively you wonder if his head might burst right there. When thinking of Justin as an artist, there is a multitude of bands/projects one can look to, each of which his musical presence is distinctly felt amongst the talent of the countless others he’s collaborated with. The most well-known of his long resume is probably The Locust, but Struggle, The Crimson Curse, Some Girls, Holy Molar, Head Wound City, Ground Unicorn Horn, Leg Lifters, All Leather, and Retox are only some of the others– each unique, but also unified in their intensity.

When it comes to music, it really doesn’t matter which version of Pearson performance you’re watching—whether in a tight, masked, insect-inspired uniform, a long white lab coat splattered with fake blood, or his unofficial “uniform” of sorts comprised of something like black pants, a plain shirt, and a worn leather jacket. He might be armed with a clear Dan Armstrong bass, or only with a microphone shoved in his mouth like a gag, chord wrapped around his neck like a noose. Regardless of any of that, you immediately know what you’re witnessing is raw honesty and passion personified.

This fervency goes well beyond just playing music, though, as anyone who knows about Justin’s career is aware. There is also the obligation to help spread the messages of others and to participate something truly genuine, which manifested itself in the form of Three One G Records (of which Justin is a creator and owner) in 1994. Since then it has served not only as a label to represent some of the aforementioned bands he personally has been a part of, but also the likes of such hugely influential bands as Antioch Arrow, The Blood Brothers, Arab on Radar, Bastard Noise, and Cattle Decapitation, among many others. The goal was to create a family of sorts, one that is dedicated to quality, both sonically and aesthetically. Twenty years later and the label has amazingly managed to continually raise the bar for these expectations, constantly adding to the lineup and coming out with new, innovative releases in an industry that many have argued would not be able to survive.

In 2010, Pearson further expanded his list of talents by becoming a published author with the release of “From the Graveyard of the Arousal Industry”, an honest and straightforward autobiographical account of his life that candidly shared some of his often-times shocking and always interesting experiences from childhood to the (then) present. This was followed in 2011 by “How to Lose Friends and Irritate People”, which also detailed some of his personal encounters of the odd kind—specifically, two very amusing and awkward experiences with the likes of The Bloody Beetroots and Designer Drugs.

With the exception of your everyday reality show television stunts (now infamous), Justin ventured into the realm of acting for the first time in 2013 under the direction of Asia Argento for the film “Incompresa”, translated as “Misunderstood”, of which he also contributed to the soundtrack alongside Three One G comrade and fellow Locust, Gabe Serbian. The film premiered at The Festival De Cannes in May 2014 under the category of Un Certain Regard.

It is clear that Pearson has always and will continue to explore different avenues of expression, reinventing himself and evolving as an artist while simultaneously managing to maintain many of the same passionate beliefs present even before the likes of Retox, The Locust or Three One G, as just a teenager in his first angry punk band called Struggle. It is this apparent need to share his message in only the most sincere of ways that continues to inspire and entertain.