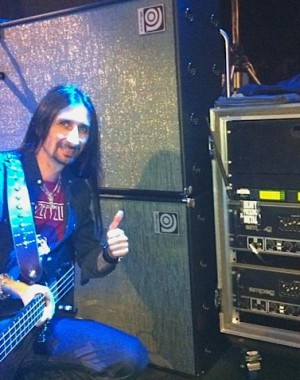 The new recruit to the band, Bassist Dave Rimmer, is every inch of a rock star. Joining in the band in 2013, initially as cover for the extraordinary Trevor Bolder, He now finds himself carrying the torch and has grown into the role. ‘Outsider’ was the first Uriah Heep record that he played on, but there’s little doubt that there will be many more. He has found a new home.

Whilst he is relatively new to the Uriah Heep family, Dave has already performed at scores of high profile shows and travelled the world with them. But this was no green recruit having his eyes opened for the first time; his track record speaks for itself. He cut his teeth touring and recording two albums – ‘Rock Savage’ and ‘We are Volsung’ – with Zodiac Mindwarp & The Love Reaction. He is also a regular member of the legendary Camden Town rock covers band Metalworks, featuring Richie Faulkner from Judas Priest, Les Binks (ex-Judas Priest), Pete Friesen (ex-Alice Cooper) and many other prestigious guests on a revolving basis.

Dave’s instinctive feel and the ability to lock onto the rhythm of any material comes not just from his experience on the road, but also perhaps from being a self-taught musician. In his early days he would play along to his vinyl collection of rock legends such as Queen, Led Zeppelin, Deep Purple and, yes of course, Uriah Heep. Dave is very much his own man but he wears his Bass influences proudly, and what a cast of legends. Dave has a true love and respect for the genuinely towering figures in Rock Bass history: John Entwistle, John Deacon, Trevor Bolder, Bob Daisley, Billy Sheehan, Neil Murray, and more.

Born in Liverpool, he relocated to London in the 90s and his career took shape from there. When Uriah Heep approached Dave, it was a simple decision to join up – and he serves with pride.