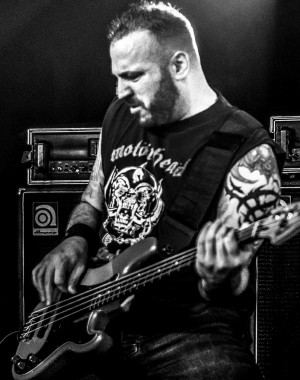 Menghi is the lynchpin and cornerstone for a nearly superhuman group of metal super stars that come together under the METAL ALLEGIANCE banner to pay tribute to the greats, from Sabbath and Van Halen to Metallica and Maiden. This idea laid the foundation for a full-blown band making original material for Nuclear Blast Entertainment.

As part of the core of Metal Allegiance, Menghi lends his considerable talents side by side with the brilliantly accomplished lineup of MIKE PORTNOY, the drum icon best known as cofounder of Dream Theater and The Winery Dogs and onetime drummer for Avenged Sevenfold; bass legend DAVID ELLEFSON, cofounder of Megadeth and onetime contributor to Soulfly; and Alex Skolnick, lead guitarist and cofounder of Testament and jazz fusion group Alex Skolnick Trio, who has also played with Trans-Siberian Orchestra.

In addition to his work as founding member, organizer, co-songwriter and co-producer, Menghi served as Executive Producer on the Metal Allegiance album.

“Mark is kind of like the Brian Epstein of the band,” Portnoy has said of his friend. “He’s the behind-the-scenes mastermind who put the whole thing together. When we began this as a live covers thing, he was the guy moving the chess pieces. When we decided to make original music, he became a huge creative element as a songwriter, as well.”

He earned a Bachelor of Technology Degree in Visual Communications, graduating with honors, before embarking on a career as an award-winning art, creative and marketing director. His work has appeared in Guitar World, Guitar Player, Bass Player, People Magazine, and the New York Times, among other publications. He’s been interviewed by top-tier global media outlets like Billboard, Kerrang!, Metal Hammer, KNAC, Loudwire and AOL Build, the live interview series featuring big names in entertainment, tech and business.