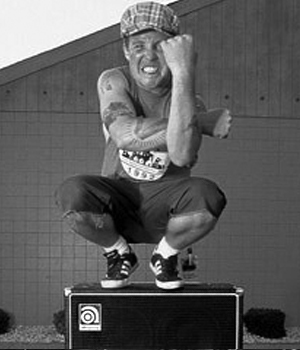 As disciples of early British punk, the Dropkick Murphys invoke the same working class values, oi! rabble-rousing and shouted choruses of their mentors. But lift the hood and you'll find their machine is oiled by Irish folk and hardcore. The band's "I'm Shipping Up To Boston" — featuring an accordion jig wrapped around the famous DM chorus — was used in the 2006 Martin Scorsese film, The Departed. And it was the band's re-worked Boston Red Sox anthem that scored with "Tessie", becoming the official 2004 World Series song for the Sox. The band's 2005 release, The Warrior's Code, cracked Billboard's Top 50 and is their biggest-selling album to date. Amid the shouting/drinking is bassist/co-vocalist Ken Casey, holding the "every day is St. Patrick's Day" songs together. A punk bass player rooted in the tenants of folk, his fretwork has two speeds: fast and faster.