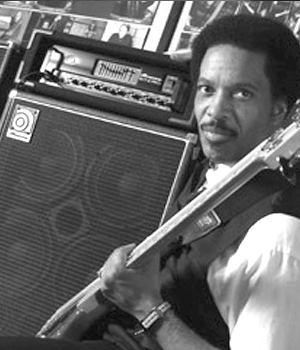 Another of rock's journeymen musicians, stellar bassist Jon E. Gee has played it (country, metal, jazz, R&B, soul), recorded with it (John Mellencamp) and toured with it (Ted Nugent). With a scholarly background in genres, Gee's famous catch phrase, "Keep crankin' it!" typifies the way he approaches the bass and how it best serves the music. As John Mellencamp's bassist, Gee has to be able to reallocate tones and styles in order to cover the wide road Mellencamp's songs drive over. In his direct method, rock bass finds equal footing with simple country pop and emotive ballads; his skill at dynamics is the lube that drives the groove. Gee also tours with his own band (The Gee Men) and even has a line of merchandise: Bass Basics, an instructional DVD, bass picks ("Crankin'"), and "Gee" shirts, emblazoned with his classic bass-stance silhouette.