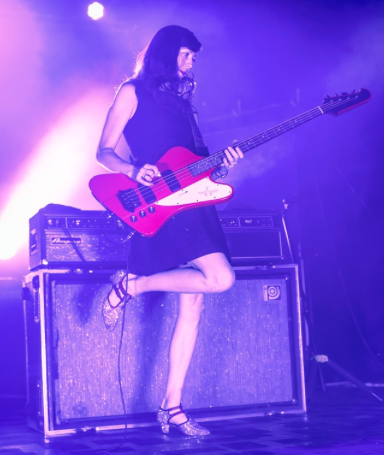 Nikki Monninger is a professional bassist and vocalist based out of Los Angeles, CA. She started playing bass after college and briefly played in a band called Stuck On Doug until forming Silversun Pickups in 2000. Bursting out of the Silverlake, CA music scene in the early 2000s, Silversun Pickups– with Monninger on bass guitar along with lead singer Brian Aubert, drummer Christopher Guanlao and keyboardist Joe Lester– have maintained their independence throughout their storied career. They released their first three albums on the local label, Dangerbird Records, before founding their own label, New Machine Recordings, for the release of their fourth album, Better Nature and their latest, 2019’s Widow’s Weeds, produced by Butch Vig. Now almost two decades into their career, they remain a vital and important rock band and have racked up ten Top 20 hits on Billboard’s Alternative Songs chart, been nominated for a Grammy, and have sold over a million records in the US.  Nikki says: "I experimented with many different amps before finding my true love with the Ampeg SVT tube amp and 8x10 speaker cabinet.  I will never use anything else.  Once I got that rig everything fell into place.  I immediately knew it was the perfect fit for our band and 20 years later I still feel the same way."